Particularly suitable for maritime, seaside, and some other themed events. Immaculately costumed above deck, thin legs and large boots below the waterline, these boats have now walked many miles around the country! 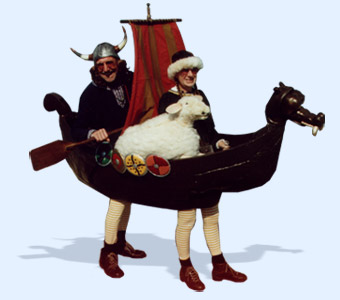 Eric and Hilda Viking are looking for somewhere nice to settle down, or plunder, after a pretty rough voyage and not enough lager breaks. On board, and feeling slightly queazy is their captured Saxon sheep, Dolly (or Nelly Mutton to her friends) who is anxious to go home to a nice grass sandwich. 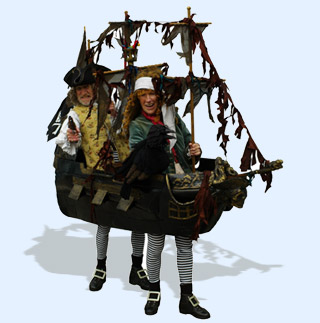 It's 1722, and the crew, Captain Nathan Darke and Liza Rudge have clearly been at sea for too long. They could be shipwrecked at any moment because the lookout, Cora the Crow, is refusing to go back into the crow's nest. 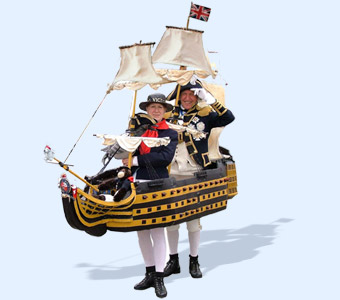 Here we are in 1805 with a bemused Admiral Lord Horatio Nelson and Able Seaman Lyon out on the high seas searching for Trafalgar. They engage in nautical banter with passers-by to take their minds off the ensuing battle. Meanwhile Lieutenant Pasco, Signals Officer and pigeon, is practising his important signal. 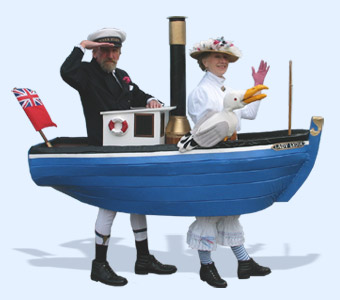 Sir Henry Greatham and Lady Lydia are out for a gentle cruise in their Edwardian steam launch. Unfortunately they have been joined by Kevin, a rather loud-mouthed seagull who is prone to insulting anyone near enough. He definitely lowers the tone of the proceedings.

* Beside the Seaside - Sunshine Variety Show

Off to sea for a day’s fishing. Inner State has finally realised that a British summer can deliver anything from fair weather to foul, so have come prepared.

Kevin the Seagull, is ready too, and can steal more fish aboard the boat than just hanging around the dockside. 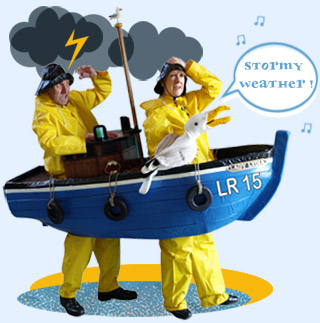 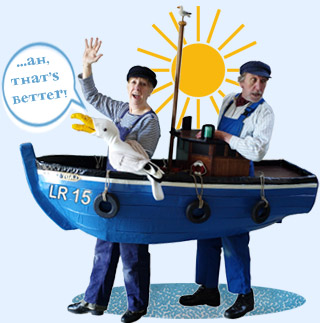 The sun is shining and our two holiday makers are off for a trip. Kevin the Seagull, who never misses a chance, is aboard and ready with helpful insults for these two dimwits who are likely to get lost before they get out of the harbour ! 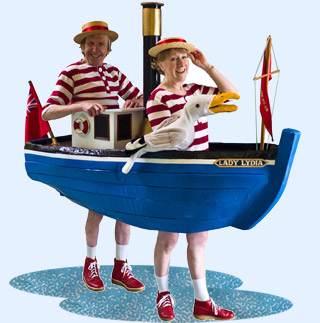 * Beside the seaside - sunshine variety show

The Gondolier seems to have taken a wrong turn at the Bridge of Sighs and turned up on the old canal near you. A good opportunity for Kevin the Seagull, armed with a map and phrase book, to practise his Italian and direct operations. 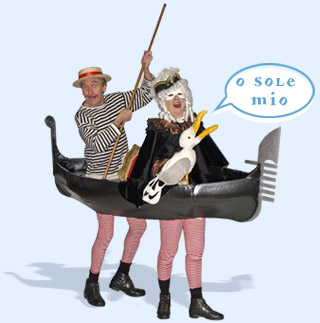