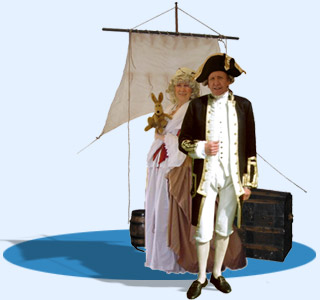 History cut down to size, or truncated, and performed in authentic costume, using a trunk for minimal props. Hence the name. Designed for mixed ages so that the whole family can enjoy a show together.

A simple backdrop can be provided as well, if appropriate and feasible.

COOKING UP A STORM
James Cook's Mum boasts of her boy's many endeavours. Anachronistic music and a toy kangaroo assist the action (such as it is). Help from the crew needed to avoid the Endeavour sinking before we get to the end of the story.

COOK'S SECRET RECIPE
Cook sets sail on his First Voyage of discovery and comes up with some interesting food for the crew aided by the ship's cat. Will it be mutiny at dinner time? Where is the ship going anyway, and what has Venus got to do with it all?

VIKING INDVADERS
A comic retelling of the entire history of the Viking nation with Eric and Hilda to guide you through. Audience may have to row themselves ashore, and there are no lager breaks.

THE SPANISH ARMADA
Drake ducks and dives as the Queen counts her money, samples Spanish culture and insults the ambassador. War breaks out in the audience but it all works out OK in the end … sort of.

THE BATTLE OF TRAFALGAR
Panic aboard as Inner State fights the entire battle in a nifty 30 minutes, with unexpected and hilarious results. Audience participation essential or the course of history might be changed.

THE RIME OF THE ANCIENT MARINER
Sir Henry Greatham attempts to read the epic poem, but is totally distracted by his assistant who insists on playing all the parts, aided by a passing seagull. A huge row ensues along with a ferocious storm.

GEORGE & THE DRAGON
A warped understanding of the encounter between the Patron Saint of England and a passing dragon. With a surprising twist in the dragon's tale leading to an unexpected ending.

ARTHUR & THE DRAGON
Same story as George and the Dragon, but the names have been changed for health and safety reasons !

TEA FOR TWO
The Mad Hatter is enjoying a quiet cup of tea when The Queen of Hearts arrives demanding attention. She is not pleased that Alice has returned to Wonderland so here comes another tantrum unless tea and jam tarts will pacify her. Lots of silliness, songs and audience participation.

PYRAMUS AND THISBE
The Mechanicals' scene from A Midsummer Night's Dream … slight liberties taken with Shakespeare's excellent script and they'll need volunteer actors from the audience to complete the cast of thousands.

Can be performed in basic costume for a range of periods including Georgian, Victorian and, of course, Shakespearean.

CINDERELLA
Shiraz and Chardonnay, the Ugly Sisters (don't call them that within earshot) are determined to sort Cinderella out for good n' all. They may let Cinders go to the Ball because they've got a secret plan. "Oh, no they haven't!" "Oh, yes they have!"

Meanwhile Buttons is sleeping by the fire and oblivious to the chaos about to erupt, and the Prince may wish he'd never gone to the Ball in the first place. It's unlikely that anyone will live ‘happily ever after' but with luck, it might all be over by Christmas.

A CHRISTMAS CAROL
A concise, thirty minutes version of the famous Charles Dickens' Christmas story, told by Sir Henry Greatham as Scrooge, while Lady Lydia animates the story with her simple puppets. Aimed at family audiences this has its dark moments but ultimately an uplifting tale for the festive season.